Interview with Mark Heywood, Director of SECTION27 -  a public interest litigation centre that uses the law to protect, promote and advance human rights in South Africa - on the present situation with regard to accessing affordable anti-retroviral medicines. Mark is also a Founding and Board Member of the Treatment Action Campaign (TAC), a long standing partner organization of Bread for the World in South Africa. 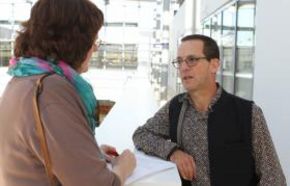 Interview with Mark Heywood, Director of SECTION27 -  a public interest litigation centre that uses the law to protect, promote and advance human rights in South Africa - on the present situation with regard to accessing affordable anti-retroviral medicines. Mark is also a Founding and Board Member of the Treatment Action Campaign (TAC), a long standing partner organization of Bread for the World in South Africa.

Bread for the World: Mark, what’s the situation with regard to access to treatment in South Africa at present?

Mark Heywood: There are more than 6 million HIV positive people in South Africa. 2.5 million people have been put on treatment in public facilities – among them 148 000 children. The Government’s aim is to increase the number of people on ARV treatment to 3.5 million in 2016 and 4.6 million in 2019.

We have seen benefits of PMTCT – prevention of mother-to-child transmission programmes. Only 2.7 percent of babies born to HIV-positive mothers are tested HIV-positive at 6 weeks. The life expectancy has gone up again to the age of 60. The AIDS death rate has dropped by 50 percent but is still estimated at 150 000 deaths a year. So we have made progress in rolling out treatment but we have also experienced drug stock-outs. One survey we carried out at the end of 2013 has shown that 51 percent of clinics across all the South African provinces have experienced stock-outs over a three months period, so potentially 400 000 HIV positive people have been affected by this. The work of TAC continues to be a monitoring role to ensure that the National Strategic Plan on HIV and TB (2012-2017) is being implemented and to point out the weaknesses and gaps where Government needs to improve.

So how do you, how do we all keep up the pressure to ensure a sustainable response to HIV?

We need to sustain a response to HIV that is exceptional. The challenge is about raising other health problems to the same level of response we have achieved with HIV not to lower the levels for HIV and we need to identify crucial challenges.  Gender inequality remains a driver of the epidemic, so does the discrimination of gay men and sexual minorities and violation of human rights in general. We have also identified the issue of children accessing treatment as a key challenge.

What role do patents play in the South African context?

Patents create exclusive markets. This may mean that price of the product is out of reach for the vast majority of people who need it. The patent system continues to kill people. With regard to ‘Pharmagate’, the South African Health Minister Dr Aaron Motsoaledi accused pharmaceutical companies of “genocide”. Perhaps that wasn’t quite the right word but one can demonstrate that hundreds of thousands of people suffer preventable illnesses and death because of patents, because of the inaccessibility of drugs. HIV is an evolving epidemic. New medicines for HIV and TB remain too expensive. In South Africa practically every patent application gets granted so South Africa has far too many patents on pharmaceuticals.

Where does South Africa stand in its patent law reform? TAC coined the term ‘Pharmagate’ for the  latest interventions  by Big Pharma. Can you explain what ‘Pharmagate’ is all about?

South Africa, to its credit, in 2013 published a draft policy which proposes to reform existing patent laws in line with the TRIPS flexibilities the way it is practiced in other countries such as India.  We as SECTION27 and TAC gave inputs to this draft policy.  We want to see the law allow pre-grant opposition as well as simpler mechanisms for compulsory licensing and stricter criteria for patentability put into place. In January this year an email was leaked to us that IPASA – the Innovative Pharmaceutical Association of South Africa – was planning to contract a very shady American lobby group PAE– Public Affairs Engagement – to run a campaign against the draft policy in South Africa from Washington. This campaign was intended to cause confusion and public opposition to the draft policy. IPASA put a budget of 6 million Rand towards this for 3 months! The campaign deliberately targeted civil society and the work of organizations like the Treatment Action Campaign, SECTION27 and MSF and specified the need to “push back” against those organizations. The campaign by IPASA was going to subvert democratic political processes and misrepresent research. It would commission research and make it look independent.

The email was leaked to us in early January this year and we leaked it to the press. IPASA has now publicly declared that they would not proceed with this campaign and the Executive was forced to disband. But we know that Big Pharma does not want South Africa to progressively reform its patent laws.

South Africa is also working on a new Investment Bill. Where is the process at?

South Africa has drafted a new bill on investment which looks at standardizing the sources of investment and doing away with a country to country basis of negotiation. Government wants to protect its sovereignty in the interest of its own people and allow compulsory licensing and the like. The South African Constitution makes it clear that the right to private property is not absolute. It doesn’t allow the Government to be unreasonable – in case of expropriation, the compensation is ‘fair and equitable’ and not at full market value. South Africa also recently got out of its bilateral trade agreement with the EU as this new Bill regulates all investments and so South Africa does not see the need to renew bilateral trade agreements.

What could Germany do to help South Africa with its reforms which among other things aim to facilitate access to treatment?

German activists can play a big role and we appeal for your active and ongoing support. Several German pharmaceutical companies are part of IPASA. It would be helpful to establish what their role was and for you to ask them if they distance themselves from what IPASA meant to do. It would also be very helpful if the German Government publicly supported the South African Government in its law reform and declared that HIV and public health are important issues for the country and that what South Africa is planning to do is absolutely within its rights as a WTO member state.

In 2001 at the height of TAC’s campaign supporting the South African Government’s new law to make medicines more affordable the EU and the Dutch Government passed a resolution that South Africa had every right to implement its reform of the medicines act in 1997. That was at the time that 39 pharmaceutical companies took South Africa to court on this act and later withdrew the case due to TAC’s intervention and public pressure. It would be helpful, if the EU could pass another resolution upholding the right of South Africa to reform its patent laws.

Mark, thank you so much for updating us on the South African situation. We will certainly try and support you in your endeavours.

The interview was carried out during Mark’s visit to Berlin on February 24th, 2014 by Astrid Berner-Rodoreda, HIV Advisor at Bread for the World, Germany and Member of the Executive Committee of Action against AIDS.