Ebola in Sierra Leone: Bringing hope into a climate of fear and despair 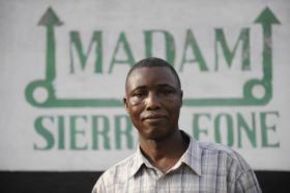 The climate today in Sierra Leone is one of fear and despair. Parents and relatives who are victims of the outbreak are severely devastated by the mode of treatment for the deceased.

A contextual analysis of the Ebola Virus Disease outbreak in Sierra Leone is essentially critical as an opening to this note for a better understanding of what is rolling on in Sierra Leone. Since the outbreak of the Ebola Virus Disease (EVD) in May this year, the disease has claimed the lives of 355 people across the country 355, and confirmed cases of 955 (Ministry of Health and Sanitation Emergency Operations Center, Press Release 26/8/2014). Statistically, confirmed deaths for Bombali and Tonkolili districts range around 20 and 13 respectively.

The figures are increasing every day. The denial and inability by many to refrain from normal engagement such as hand shaking, obtaining certificate of death, reporting unusual health experiences to health centres and the overwhelming lack of equipment and expertise to tailor the information about Ebola are attributed to causes leading to the rapid spread of EVD in Sierra Leone. Couple with this is the Ebola messages that have mystified the disease as well as the stigmatisation of those who have survived the disease, their relatives and those who have graduated from quarantined homes. This stigmatisation has shattered our once cohesive society and posses very serious challenges for peace building intitiatives in the post Ebola era.

Added to this, the outbreak is taken a new dimension every day of its existence in the country. Economically, Sierra Leone runs on a fragile economy attempting to solidify it grounds with the new markets opportunities in industry. Whilst the country is gradually suffering from international isolationism, this is further fuelled by inter-district travel regulations within the country. The cost of this is severely felt by the rural poor who depend largely on everyday business for survival.  Traders of perishable commodities could not travel for instance from Koinadugu district the main source of vegetable goods to other parts of the country easily, this is affecting market prices and limiting access to food in time and volume. The idea of districts and towns been quarantine is increasing the suffering of the people, but probably this is what wisdom could offer the nation as the best strategy.

Bombali and Tonkolili districts are in a centre stage in this national dilemma. As days pass-by, fear is becoming glaring and the consequence becoming huge. Socially, life is no longer the same. The ban on social gatherings, night clubs, cinemas to reduce the effects of crowding, is making life boring, and signal signs of abnormality.

Looking the situation with another lens, people suspected to interact with EVD patience and EVD suspected cases need to be rehabilitated. A quarantine signal EVD is within a particular environment hence stigmatization. Fear and stigma is a critical factor that is increasing the spread of ebola, discouraging victims to be honest to willingly report themselves for treatment and attention.

What has been done so far?

Since the outbreak of EVD, MADAM has been a member of the district task force team helping to define strategies to contain the spread within the district, raise awareness on the truism of the disease, and precautionary measures.

MADAM instituted hand wash regulation at the entrance of the office gate for staff and visitors entering the premises of MADAM.

for communities in Bombal and Tonkolili districts which were distributed in a ceremony on Paki Massabong chiefdom in Bombali district, and Tane, Kunike Barina and Barina chiefdoms in Tonkolili districts as response to the emergency. Organize radio interviews and television programs as advice measures to the outbreak.

What can be done again?

Sierra Leoneans are under going through another race of trauma and fear. The situation at the moment is such that, many sick Sierra Leoneans do not go clinics, hospitals and other medical facilities in this crisis fearing that they will be inform that they are Ebola positive. Ebola has been so much stigmatized and mystified that surviving family members of the Ebola victims are treated as outcasts. Suspected Ebola cases have been quarantined often involving whole families including children. Our once cohesive society has been shattered. There seems to be more trauma now than during the war!  In anticipation, many lives will suffer from non-Ebola related deaths, probably more than ebola would have taken. In this direction, MADAM would like to embark on the following activities for psychosocial therapy.

Giving this prevailing situation, this is the time to act. As the death toll increase on a daily basis, redress actions become more stringent. Response to ebola in Sierra Leone is still extremely inadequate, hence the reason why the quick spread across the country. The lack of equipment and the realisation of health workers feeling very vulnerable has militated against the cooperation of health workers in areas where monitoring of health personnel is minimal. One could reason somehow with the position, as knowledge and equipment are lacking, the slightest mistake leads to contraction, this makes the situation appalling. This illustrates the need for MADAM and her donor partners to step up efforts in the fight against the Ebola disease.

Greetings from Makeni and thank you for your solidarity for our current situation.