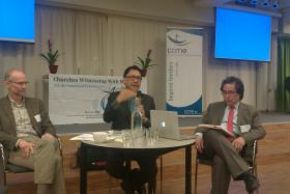 The Fifth International Consultation of Churches Witnessing With Migrants (CWWM) convened on 11 May 2014, at the  Immanuel  Church  in  Stockholm,  on  the  eve  of  the  7th  Meeting  of  the  Global  Forum  on  Migration  and Development (GFMD).

The following text is taken out of the statement that was published on May 11th 2014.

We were 40 participants from 24 countries representing the three communities that constitute who we are as CWWM: migrants,  migrants’  organizations, and church and ecumenical  institutions. We  met seven months after the High Level Summit on Migration and Development in October 2013 in New York City  where we issued the 17-point Advocacy Paper. In Stockholm, we reviewed the meaning of migration and resolved to elaborate, deepen and broaden our understanding and practice of advocacy and development justice. We discussed more fully the theological and ethical resources that add to the normative foundations of our advocacy.

Building on the momentum of the CWWM 4 in New York, and affirming the 17-point analysis conceptualized in the CWWM  Advocacy  Paper,  the  participants  of  CWWM  5  re-affirm  the  right  to  migrate  and  reiterate  the  vision  of  a world  in  which  people  are  no  longer  forced  to  migrate.  We  recognize  our  inherent  collective  call  to  advocacy  with migrant communities, in terms of developing new narratives to the paradigms of migration and development, raising awareness of these new narratives to our grassroots constituencies, building platforms for the rights of migrants, and

speaking truth to power with our own collective power.   From the grassroots, national, regional, and multinational levels, we must continue to press for a fundamentally new paradigm that upholds and protects migrants and their human rights, at the same time we insist that existing structures be inclusive and accountable.

In Stockholm, we asserted that development justice is the general framework of CWWM for the work of advocacy. Its pillars, namely, redistributive justice, economic justice, social justice, environmental justice and accountability to the people, are co-constitutive and indivisible. These pillars are simultaneously global and local in character.

Even as it is not possible to understand the realities of forced migration without understanding the intersectionalities of  racialized,  gendered,  sexualized,  and  securitized  migration,  it  is  also  not  possible  to  articulate  the  fullness  of advocacy without insisting on the need for advocacy to be multistranded, inclusive, and strategic, while at the same time being attentive to the dangers of reproducing practices that sustain globalizing neoliberal capitalism.

In this context, we commend to our constituencies the following:

We say once more that forced migration, human rights violations, and development injustice are interrelated, and we declare yet again that migration (people on the move), human rights, and development justice are indivisible. In the theological language of the faith-based constituencies of CWWM, the former are nothing less than social or structural sin; the latter are undeniable expressions of the abundance of life, as gifts of God.

We assert further that forced migration is about dispersal, displacement, and dislocation. It is always accompanied by estrangement and the creation of endangered, criminalized, or anathemized “Strangers” or “Others” in our midst. In fact, forced migration radicalizes the experience of the Stranger or of Otherness in our time; and  the existence of the Stranger  in  our  midst  raises  for  us  the  inescapable  problems,  prospects,  and  possibilities  of  transformation.  Here, hospitality and advocacy embrace.

While  in  the  Biblical  tradition  the  existence  of  the  Stranger  is  always  accompanied  by  the  ethical  challenge  of hospitality, we recognize that hospitality does not always aspire towards genuine compassion, or eventuate in acts of mercy  or  acts  of  justice.  When  hospitality  is  implicated  in  the  rituals  of  power  and  privilege,  the  latter  legitimizes structures of estrangement that require strangers who can be the recipients of acts of hospitality. Such exclusionary logics based on race, gender, sexuality, and security, for example, migrate on to the structures of hospitality without

being  overcome  or  transformed.  Thus,  even  if  such  hospitality  directly  addresses  the  condition  of  the  Stranger brought  about  by  forced  migration,  it  can  only  be  a  necessary  though  insufficient  response  to  overcoming  forced migration. Hence, the need for acts of mercy and acts of justice within the framework of development justice.

The CWWM 5 has been challenged to look beyond and towards the kind of hospitality where both acts of mercy and acts of justice become co-constitutive. Such hospitality offers the opportunity to live well together in genuine partnership and solidarity.