Human Mobility in the Context of Climate Change

On the occasion of the Human Mobility Day 17/11 at the 27th UN Climate Conference COP27 this Blog was written together with Dr. Katherine Braun, Migration Researcher and Policy Advisor for Refugee Affairs and Human Rights, Church of Northern Germany. 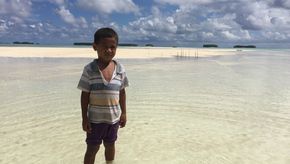 At COP27 in Sharm El Sheikh, Bread for the World is addressing Human Mobility in the Context of Climate Change (HMCCC) at various side events. It is very clear: People fleeing the effects of climate crisis because their livelyhoods are destroyed, have to be supported and protected. This need for protection not only expands to people on the move but also to those who stay. International responsibilities need to cover both in order to address the protection gap. BfdW points out urgent need for action in the field of Climate Action and Migration Policy.

Global warming has already led to more intense and frequent weather events around the world. Slow onset weather events such as sea level rise and desertification and sudden events such as droughts, tropical storms and hurricanes, heavy rainfall and floods are already disrupting the lives of millions of people. Most of the affected people will not be able to move.

Industrialized nations and emerging economies with high levels of emissions are primarily responsible for climate crisis. Although they have contributed the least to the current crisis, the countries most affected by the impacts of climate change are located in the Global South, more specifically the so-called least developed countries (LDCs), and within them, the most marginalized groups. They are constrained by their geographic location, but also by limited coping and adaptation capacities: lack of financial, technological and technical resources, insufficient social protection systems and poor governance. Most of them will not be able to move, and those who can, lack sufficient international protection and regular pathways.

According to the Sixth Assessment Report of the Intergovernmental Panel on Climate Change (IPCC), 3.3 to 3.6 billion people worldwide currently live in environments vulnerable to climate change. According to the Internal Displacement Monitoring Centre (IDMC), a total of 288 million people have been displaced within the borders due to climate-related disasters since 2008. Only in 2020 30.7 million people in 149 countries were displaced due to climate related disasters. This is in addition to an unknown number of people who had to leave their homes due to slow-onset processes such as droughts or sea-level rise.

However, the worst impacts have yet to be felt. The IPCC Special Report “Global Warming of 1.5°C” states that climate change will significantly speed up this trend. In sub-Saharan Africa, Latin America, and South Asia alone, by 2050 more than 140 million people will be threatened by droughts, increasing desertification, crop failures, storm surges and rising sea levels. Even under the most optimistic scenarios, slow-onset processes and extreme weather events will drastically impact the habitability of the most affected areas of the world.

What is Human Mobility in the Context of Climate Change?

Human Mobility in context of climate change (HMCCC) includes different forms of movement of people, such as internal displacements, seasonal and permanent cross-border migration and planned relocation among others.

The impacts of climate change can affect human mobility both directly and indirectly. Climate change can reinforce, decrease or redirect existing movements, often from rural to urban areas. It influences temporary and seasonal as well as permanent migration patterns.

Thus, human mobility in the context of climate change (HMCCC) is determined by a variety of factors, varying with respect to the nature of the hazard, as well as social, economic, political and demographic factors. Women, children, LGBTIQ, the elderly, people with disabilities and members of ethnically and racially discriminated groups have the fewest resources to prepare for and protect against the impacts of climate change and disasters.

Tailored solutions are necessary to respond to the needs of affected populations, especially people living in vulnerable situations should not left behind.

Human Mobility can be an adaptation strategy, if….

Human mobility can be an adaptation and risk reduction strategy and may help reduce vulnerability, if human and social rights are protected and if movement is voluntary, safe, and orderly. This was confirmed in the 6th IPCC-Assessment Report on Vulnerability and Adaptation. The more agency people on the move have, i.e., the higher their degree of freedom of mobility, the greater the potential for individuals, their communities in regions of origin and host countries.

However, international protection and the freedom to move remains severely restricted and we are far from realizing the principle of “migration in dignity”. Climate migrants do not fall under the mandate of the 1951 Geneva Refugee Convention. The lack of regular pathways for migration forces people to take life-threatening migration routes and exposes them to human rights violations, labor exploitation and gender-based violence, among other threats. Planned relocation processes are often accompanied by non-economic loss and damage, human rights violations, including economic and cultural rights. Internal Displacements are not sufficiently addressed and lack financial resources and institutional capacities.

Regular pathways for migration can support vital coping strategies which can protect lives and better prepare communities for future loss and damages. At the same time, it should be ensured that people can stay if they wish to. It is the responsibility of the international community to protect people affected by the adverse effects of climate change, to assist with adaptation measures, and to address loss and damage in order to ensure a life in dignity.

Towards a people-centered, human rights – and equity-based approach to HMCCC

Many climate migrants and displaced people, as well as those at risk of displacement, are currently left to fend for themselves without sufficient protection to ensure their rights. The number of these people is increasing rapidly. Moreover, HMCCC is increasingly seen as a security risk, and we are far from closing existing protection gaps for people affected.

A people-centered, human rights- and equity-based approach to “averting, minimizing and addressing displacement” requires that policy frameworks respond to rights, needs and aspirations of people on the ground whose lives and livelihoods are directly affected by the impacts of climate change, especially when those impacts (in combination with other stressors) make them particularly vulnerable.

This approach demands diverse, but coherent policy approaches that ensure that people are able to stay in the face of a changing climate or to migrate freely and with dignity within or across borders if they wish to do so. Even though HMCCC has been included into climate negotiations and the UNFCCC mechanisms since the Cancun Agreement in 2010, it is still not sufficiently included in climate policy, and there is still far too little funding available, especially with regard to cross-border migration, displacement and planned relocation as adaptation.