"The EU must accept migration as a normality"

At the summit between the European Union and the African Union on February 17th/18th, the EU wants to commit African states to closer cooperation in the fight against irregular migration, and wants to deploy Frontex in Africa. Moctar Dan Yaye of Alarmphone Sahara describes the negative impacts that European migration policy is already having on the Sahel - and calls for a change of course. 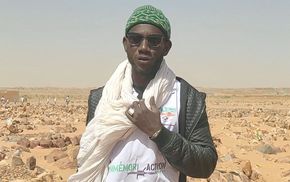 Migration again. It is remarkable how obsessively the EU places border security and migration management at the top of the agenda at every summit with African countries. What do African partners of Brot für die Welt think of this focus - this is what I want to talk about with Moctar Dan Yaye, who is responsible for public relations at Alarmphone Sahara. We have a call, shortly after he has organized a commemorative march with other activists and migrants to the cemetery of Agadez/Niger . At the beginning of our conversation, he explains to me what the march is all about.

Moctar Dan Yaye: "On February 6, we commemorate all over the world the people who have disappeared or died along the flight and migration routes. On this day in 2014, 15 migrants died at the border between Morocco and the Spanish exclave of Ceuta when they were attacked by the Guardia Civil with rubber bullets and tear gas. To date, not a single member of the Guardia Civil has been convicted for this crime [note; Brot für die Welt-partner ECCHR continues to legally represent some of the bereaved families to this day]. This incident is just one example of the dangerous border regime the EU has established on the African continent.

Andreas Grünewald: At the EU summit, the EU wants to step up the fight against what it sees as illegal migration. Is the summit an issue in Niger?

For me personally, the summit is important. But in general, people here pay little attention to the summit. Poverty, security, good administration and governance - these are the issues that people are concerned about. And here, none of the many summits in the past has led to improvements.

In Germany, too, public interest in the summit is low. It's hard to scandalize problematic developments there, like the further arming of intra-African borders, or the increased intelligence sharing to fight so called llegal migration, with Frontex as the central actor.

In any case, we have to critically engage with this. After all, the externalization of European migration policy is already affecting us in a very negative way. At the Valletta summit in 2014, the EU identified Niger as a central country for stemming migratory movements to Europe and completely changed our policy. Until 2014, migration was considered normal in Niger. Agadez lies on the salt route that runs through the Sahara and Sahel, and has been a major hub for goods and people from across West Africa for centuries. Many people from the rural regions of Niger move to Ghana or Benin during the dry season to find work. Others spent long periods as guest workers in Libya or Algeria - without even needing a visa. Then the EU came along - and in 2015 demanded the implementation of a law that put migrants under general suspicion, and largely banned migration across national borders. Suddenly, everyone was talking about "illegal migration" - a concept we had not even known before. The government went along with this because it depends on European money. It allowed itself to become the gendarme of Europe.

What have been the consequences?

They have been catastrophic. In Agadez, the local economy collapsed because bus drivers, hoteliers and restaurant owners lost their livelihoods. But it's not just here, throughout Niger the economy is suffering. Freedom of movement within the West African Economic Community is massively restricted, and guest work in North African countries is hardly possible. This is driving many people into poverty. Of course, the situation is particularly difficult for migrants heading north. To escape the increased controls, they and their smugglers are taking increasingly dangerous routes through the Sahara and avoiding water points. All of this makes migration more dangerous, much more expensive - and makes it harder to get emergency help in case of vehicle breakdowns. The law also affects us activists. Since then, we have been working in a legal gray area, as any support for so called "illegal" migration and migrants is prohibited. Even if we are actually neutral towards migration - we neither want to prevent nor fuel migration, but only defend the rights of migrants and save lives - we work in constant fear of being criminalized by the authorities.

There are many parallels to political developments at the EU's external borders. Whether in Greece, Poland or Spain: Flight and migration are seen by politicians as something abnormal that must be fought by all means. In doing so, they also accept far-reaching restrictions of fundamental rights - of migrants, but also of journalists or activists.

Yes, we are wittnessing this trend all around the globe. For example, Alarmphone Sahara is in exchange with activists from Latin America, who have been confronted with massive violence along the flight and migration routes for decades. It would be important to deepen this exchange - also with European actors. It must be clear to the European public: What the EU is currently doing in countries like Niger is a kind of "subcontracting." African governments are paid to do the dirty work of fighting migration. The suffering of migrants doesn't stop, it just moves further away from Europe - and thus out of European consciousness.

I think we agree that the political relations between Europe and Africa need a fresh start. In your view, what would be key elements of a new policy between the two continents?

Good relations between Europe and must be based on respect and honesty. Respect means that Europe must end its paternalistic treatment of Africa. The EU must finally accept African states as independent and equal partners, not as countries that can be ruled - whether in agricultural, migration or trade policy. This also includes listening to the people in African countries. In the Sahel, for example, people want France to withdraw once and for all. France is pursuing its own political agenda here, and people don't want that. For example, a French military convoy was blocked for weeks by the population between Burkina Faso and Niger to demand the departure of the French military. And on honesty: Europe should not forget its own history. Europe itself is a continent that has always been strongly influenced by migration. To now stand up and brand migration as something abnormal and dangerous is not acceptable. The EU must accept migration as normal.

Alarmphone Sahara is a cooperation project of initiatives and activists from Africa and Europe and since 2019 partner of Bread for the World. APS provides emergency aid and supports people along the flight and migration route through the Sahara. The organization also documents human rights violations such as Algeria's illegal pushbacks in the desert on the Niger border.