We want to have the right to say ‚no‘! Women’s rights over access to land, their participation in decision making on investment plans and land acquisition have to be at the heart of the EU-AU-partnership and the coming EU-AU-Summit. This is the request of the Rural Women’s Assembly from Southern Africa to the political leaders from Europe and Africa. Interview with Lungisa Huna and Mercia Andrews

Our land is our life - Large-scale land acquisitions in Africa 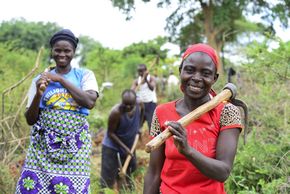 In view of the EU-AU-Summit 17./18.02.2022, the Africa-Europe week 14.-18.02. and the self-organized Peoples‘ Summit on 14.02.2022 Lungisa Huna and Mercia Andrews explain what they request from European and African leaders and their development finance institutions regarding investments, partnerships and land governance.

As representatives of the Rural Women’s Assembly (RWA) you engage since 2019 with the EU and the AU – what is your main intention, what do you advocate for?

Lungisa Huna/LH: We are working together with local women from rural areas that unite together in the Rural Women’s Assembly/RWA. We intend to get their voices heard at all levels of political decision making. And especially when it comes to investments and land acquisitions, land rights and land justice for women which are at stake. The neglect of women’s rights on land and violence against them are of systemic and patriarchal nature. Within our reality, those investment plans are still male dominated, decisions are taken by men, without listening to local women and their concerns. Also the leaders from EU and AU and from the governments need to listen to these women, especially to those, who are affected by the big rush on African land. Their voices have to shape the agenda for decision makers – not the decision makers and investors interests!

Mercia Andrews/MA: Women’s and girl’s rights are not negotiable for us. We need to remind all decision makers constantly on that. The RWA is member of various civil society platforms that engage with AU, EU and governments in order to bring this again and again into the picture. Yet, not much in decision making over land has been changed since colonial times. But land acquisitions continue, African land is sold out to national and international investors without even asking the affected people on the spot, but evicting them, once the decision is taken. So it is high time to change it now! A feminist approach to land governance and land justice is urgent, as it otherwise separates and segregates women further from just and sustainable development and prosperity for the whole African continent.

On this background, what do you expect from the EU-AU-summit?

MA: We expect and hope from this summit, that it will become a starting point for a process where the concerns of African women become decisive. We are deeply concerned about the increasing dependency of the African countries on the foreign investments from Europe, China and the whole Global North with potent private sector and know-how and the support via the Development Financiers like IMF and World Bank or the Development Finance Institutions from Europe. The economic recession and high unemployment as e.g.in South Africa is generating a readiness of African states to sell out the land to investors for mining, agriculture, infrastructure – but the benefit is not shared with the local people, the profit serves the interests of the Global North. This power imbalance needs to be addressed. Policies are developed to eradicate inequality and yet these policies are not implemented. We expect from the European and African leaders a real shift towards real participation and orientation on local solutions, agroecological and small scale farming, support for rural women and fullfilling their rights. And for this we also need the Churches and the NGOs in the Global North that support our requests and advocate together with us for Rural Women’s concerns and influence political decision makers in their home countries.

LH: the investment policies still follow a mainly patriarchal capitalist paradigm, which often colludes with the policies of African leaders. The practiced large scale land investments result in various levels of violence against women, structural as well as direct violence in form of denied access to land, increased food insecurity, violent eviction from land, and disrespect of the Right to Food. The companies coming to Africa continue to pollute the environment, destroy social relations and do not care about what happens afterwards. Large scale land aquisitions have already massively destroyed traditional and indigenous knowledge and practices. This must be stopped and not be supported furthermore under the cover of sustainable investments and business with Africa.

What are your requests to the EU and AU, the member states and development financiers?

LH: we have a major critic to the EU-AU-Summit, which is that they kept changing the agenda and did not listen to the African civil society and especially the rural women’s concerns. We now decided to take a stance and organize together with ‚Our Land is Our Life‘-Platform the ‚Peoples Summit‘ on 13./14.02.to advocate for Land Rights for Women, Peace and Justice as well as food sovereignty. A Peoples Summit-Declaration will be adopted and handed over to the UN-Special Rapporteur on the Right to Food, Michael Fakhri, who confirmed his participation and will take the People Summit’s Declaration into the official event and discussions with the decision makers and the official EU-AU-summit at the following days.

MA: Within our networks we have published in 2021 a declaration and 3 Policy Briefs on Large Scale Land Aquisitions with a series of clear recommendations and requests. Out of these we underline and speficy 4 major requests:

1. We want to have the right to say ‚No‘! Free Prior Informed Consent/FPIC is to be fulfilled. Nothing about us without us! And we stress that the UN Declaration on the Rights of Peasants / UNDROP is a central document that needs more attention. The UNDROP as well as the principles of the UN-Voluntary Guidelines on Land Tenure (VGGT) must be applied and followed and be core element for good land governance in Africa.

2. Policy makers have to acknowledge, that rural women are the producers of food and sustain the families and households as it was evident during the COVID-crisis. We cannot achieve sustainable development without taking this fact into consideration.

3. The actual reviews of the National Land Policies in various African countries should not follow the pressure from business interests to make land available for further extraction and investments. Land is life for the local population. Rural women position themselves against land titles and private property as this contradicts the communal and traditional land rights system. These ‚commons‘ shall not be sold on the local market.

4. Land based investments should no longer be supported through the European Governments and their Development Finance Institutions. Instead local solutions for economic development using agroecology and small scale farmers systems with a focus on rural women on farms should be prioritized and strengthened.

Lungisa Huna and Mercia Andrews, both from our partner organisation Trust for Community Outreach and Education/TCOE in South Africa are representatives of the Rural Women’s Assembly/RWA, a self-organised network or alliance of national rural women’s movements, assemblies, grassroots organisations and chapters of mixed peasant unions, federations and movements across ten countries in the Southern African Development Community/ SADC region. The RWA is engaged in various civil society platforma and networks as the Alliance for Food Sovereignty in Africa/AFSA , Our Land is Our Life platform/OLOL and the Global Convergence on land and water struggles/CGLTN.