In May 2017, Xi Jinping called for the "Belt and Road Initiative (BRI)" to be expanded into a "Road of Peace". However, the impact of the initiative on peace and conflict is uncertain and the risk of aggravating existing conflicts is high. A new study shows that BRI has so far been 'conflict-blind' and the author suggests more engagement with China for promoting peace in line with Agenda 2030. 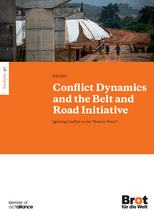 Survey on Conflict Dynamics and the Belt and Road Initiative

Scope and orientation of the BRI

China's former "New Silk Road" has been expanded over the past few years to become the "Belt and Road Initiative (BRI)" and now extends to over 135 countries around the globe, with the focus on Asia, Europe, Africa and Latin America. It is expected to involve more than one trillion US dollars in investments. Several recent publications highlight the economic impact of BRI, particularly in terms of agribusiness, infrastructure, energy, trade and food. Social and environmental issues are also considered. However, the impact of BRI on conflict dynamics in the neighbourhood and beyond requires further attention, as many of the BRI countries and regions are fragile and affected by conflict and/or post-conflict contexts where the underlying conflict dimensions persist. These can be re-ignited, especially when Chinese investments touch massive economic and geopolitical interests of powerful states and elites. In many of these BRI countries, "Brot für die Welt" works with a broad network of partner organisations and supports civil society commitment to sustainable development and just peace. Hence, it is highly relevant for us to raise awareness about the BRI and its impact on the dynamics of conflicts at all levels, as this will influence our and our partners' development and peace work. We therefore commissioned a survey on the impact of BRI-initiative on Conflict dynamics in Asia and the South Caucasus in 2019 , which is now available here.

The overview published here consists of a comprehensive mapping of the available analytical material and attempts to fill a gap in the English-language literature on the impact of BRI on peace and conflict at the national and local levels, both directly in the Asian region and beyond. It provides an overview of existing analyses and data from academics and civil society networks working in and on the various countries in South, Southeast and Central Asia and the South Caucasus. Some of the results of this survey are surprising, while others unmask and show how little attention has been paid to the conflict dimensions and sustainable peacekeeping along BRI's routes and projects. The central conclusion of the study is that BRI is "conflict-blind" - i.e. that it has no mechanisms to analyze the interactions between BRI initiatives and the causes of conflict. Nor does it take into account that the BRI and its projects can become potentially conflict factors.

BRI initiatives after corona pandemic and for economic reconstruction...

Of course, the corona pandemic has changed everything, both globally and at national and local level. The long-term impact of the corona pandemic on social and economic life is still unclear. However, the initiative is expected to regain momentum before the crisis ends, as China re-equips it as a platform for strengthening public health systems through the Health Silk Road ('Health Silk Road') and provides further resources for economic recovery, especially for BRI projects in need. In particular, fulfilling the hopes and promises associated with BRI and its projects could regain importance for China's own image as a global player. We believe it is very important that all actors from governments, academia and civil society continue to monitor this, work together with other BRI actors and advocate for increased attention to political and socio-cultural elements for the preservation of peace and sustainable development.

...must not leave anyone behind!

The need for inclusiveness of the processes around BRI, as well as networking and information exchange between those dealing with peace and security issues in the different BRI countries is obvious. All BRI projects should leave no one behind, serve peaceful and inclusive societies in line with Agenda 2030 and contribute to the achievement of the SDGs. But the major finding of this study is that the risk of aggravating conflict on several levels through the BRI is extremely high. The BRI does not offer any guidance with respect to how actors promoting and developing the BRI should behave in conflict-afflicted areas, nor does it make considerations with respect to the mitigation of violent conflict at the interstate, sub-national, local or community levels. The only consideration it does offer is that companies should consider security risks around their investments, and conduct various forms of political, economic, and social risks assessments. Another key concern is the lack of a peace and security pillar within the BRI and the actual trend to increase the involvement of Chinese security firms in BRI investment projects also overseas.

The report makes the following key recommendations on the basis of these findings:

(1) The Chinese government and other countries involved in implementing the Belt and Road Initiative need to establish a platform to consider the impacts that the BRI will have on conflict dynamics. This could be modeled after platforms that have been set up to address environmental concerns and corruption. Establishing such a platform would provide peace practitioners, researchers, international organizations and states a space to engage around reducing the impacts of the BRI on conflict.

(2) NGOs are key stakeholders in nearly all countries through which the BRI passes. As such, projects must consult with civil society in advance of any implementation. Presently, implementors of BRI projects have failed to do this.

(3) UN Business and Human Rights platforms could be used more intensively for mutual engagement: A growing number of Chinese companies are now participating in these platforms, and the UN Working Group on Business & Human Rights might become a space through which China might be engaged. The Working Group has a project on business and human rights in conflict-affected contexts, which might be a space for this engagement.

(4) As the majority of states have signed MoUs on BRI collaboration with China, and as the BRI-platform has some level of recognition from other key international institutions such as the United Nations and the Asian Development Bank, it would be a mistake to ignore BRI, or consider the BRI insignificant for efforts to address violent conflict. This requires more attention by policy makers, peacebuilders as well as experts for economic development. It needs to be taken up in discourses along with the 2030 Agenda and fulfilment of the SDGs.