Ambition with a plan: 100% RE for Bangladesh

During COP 25 in Madrid, Bread for the World together with our partner Coastal Development Partnership from Bangladesh and the World Future Council launched a study showing that 100% Renewables in Bangladesh is technically feasible, cheaper than the fossil fuels and supporting poverty eradication. 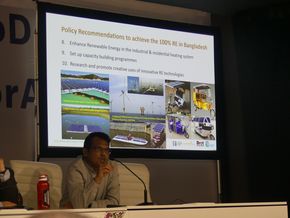 Achieving adequate climate ambition is one of the challenges at COP25 in Madrid. So far, countries self-defined mitigation plans (Nationally Determined Contributions, NDCs) are far from in line with the temperature goal to stay below 1.5 degrees from the Paris Climate Agreement. Even if all countries complied with their NDCs, it would lead to approximately 3 degrees warming. What is worse, as the example of Germany missing its 2020 target to reduce emissions by 40% compared to 1990 shows: countries tend to fail in meeting even their unambitious targets.

Almost all countries must substantially increase their ambition

According to Climate Action Tracker, a website collecting scientific data on global climate action, only Morocco and The Gambia have an NDC in accordance with limiting global heating to 1.5 degrees. Bhutan, Costa Rica, Ethiopia, India and The Philippines at least are in line with 2 degrees. All other countries’ NDCs are far from being adequate. To limit global warming to 1.5 degrees countries’ NDC emission reduction pledges must be increased by about 50%, according to a recent study by Climate Analytics. Hence, incremental changes are simply not enough. Almost all countries must substantially revise their NDCs before COP 26 in November 2020, when the first implementation period of the Paris Agreement begins. For the EU, this means to increase its NDC from 40% emission reduction by 2030 to approximately 65-70%. Currently, only 50-55% are on the table, which is clearly insufficient. Consequently, Germany must increase its 2030 target from 55% to at least 70% emission reduction.

With more than 80% of global greenhouse gas emissions, energy related emissions are by far the major opportunity to reduce emissions. We must decarbonize our energy systems and use 100% Renewable Energy. This includes large improvements in energy efficiency and an absolute reduction of energy demand in industrialized countries. By setting 100% Renewable Energy targets, countries can develop a positive narrative for climate policy and enable the necessary levels of ambition.

In order to showcase how this can be done in a Global South country, Bread for the World together with the Bangladeshi partner organization Coastal Development Partnership and the Germany based organization World Future Council started the project “100% Renewable Energy for Bangladesh – Access to renewable energy for all within one generation” in 2018.

Opportunities and challenges for Bangladesh

Bangladesh is among the five fastest growing economies in the world. Yet, the country’s sustained economic expansion increases the energy demand and strains existing energy infrastructure. Keeping energy access reliable and energy prices low has been a continuous struggle over the past decades.

A decentralized renewable energy system presents a massive opportunity for Bangladesh to accelerate economic development, whilst improving energy access, livelihoods and the health of millions of people in a sustainable manner. In fact, over 5 million Solar Home Systems (SHS) have been distributed in areas where electrification and grid expansion were particularly challenging. To date, SHS have provided electricity services to over 11% of the population and thereby saved consumption of 1.14 million tons of kerosene for lighting, worth more than $400 million USD.

A series of multi stakeholder workshops took place in Dhaka in 2018, gathering participants from government, development organizations, financing institutes, think tanks and civil society organizations. The participants discussed the feasibility of a transition to 100% RE. Given the densely populated territory of the Asian country, the option of deploying floating RE and off-shore wind technologies was particularly discussed.

Unlocking the full potential of RE for sustainable development and implementation of the Paris Agreement in Bangladesh requires donors to join efforts. Hence, a meeting of 25 German Parliamentarians and experts was held in the German Bundestag in June 2019 to share first-hand experiences from Bangladesh and unveil how international cooperation can contribute to the energy transition globally.

At COP 25 in Madrid, Coastal Development Partnership, Bread for the World and World Future Council launched their study “100% Renewable Energy for Bangladesh – energy access for all within one generation” in an official UNFCCC side event. The study shows that 100% RE in Bangladesh is technically feasible. It would require only 0.5% of Bangladesh’s land mass for solar PV and 1% for wind turbines. In addition, it is cheaper than a fossil pathway. While a 100% RE pathway compatible with 1.5 degrees requires additional investments of 140 Billion US$ between today and 2050, it would save 200 Billion US$ in fossil fuel costs. Thus even ignoring health and climate impacts due to burning fossil fuels, higher investment needs for RE lead to a positive return – and to decreasing energy prices. What is more, in 2050 there would be approximately 500’000 more jobs in the energy sector in Bangladesh if the country went 100% RE.

The scenario shows for every year from today until 2050, how much of which technology needs to be deployed and how much investments are needed. It also shows which locations in the country are technically suitable for the deployment of different RE technologies. It thus informs policy makers, civil society and the private sector about how to redesign its energy policies, to avoid stranded assets in fossil fuel infrastructure and ultimately to increase its NDC and climate ambition. By showing the benefits of 100% RE – lower energy prices, massive fuel cost savings, lower need for energy imports, higher labor demand, lower health impacts, zero emissions – this study provides many reasons on a scientific basis for more ambitious climate and energy policies in Bangladesh. Much more of this kind of thinking is necessary to motivate ambition. Therefore, the launch of this study in front of a large audience at COP25 was a great success.