Struggling for peace and human rights needs long-term commitment and resilience to resist frustration. How to maintain the momentum? How to assess results? And how to deal with setbacks? Partners from South Asia and the Western Balkans visited Mostar and held a 5-day workshop in Sarajevo to discuss these issues and reflect on strategies. We want to share some insights from this unusual encounter. 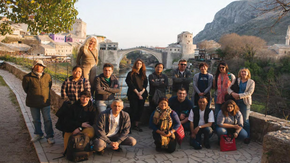 The encounter was funded by Brot für die Welt and organised by the Centre for Nonviolent Action (CNA), a peacebuilding organisation based in Sarajevo (Bosnia-Herzegovina) and Belgrade (Serbia), in March 2022. The most relevant discussions and results were compiled in a joint report "Peacebuilding in South Asia and the Western Balkans" which is now ready for download. The idea of initiating an exchange between peace activists from Asia and the Balkans stemmed from previous cooperation between United NGOs Mission Manipur (UNMM), Brot für die Welt (South Asia Desk) and the CNA-team that gathers many years of expertise in nonviolent action, networking and working with war veterans across the war-torn region of former Yugoslavia. As the CNA-team outlined in a more detailed documentation for participants, “peacebuilding is hard and complex, issues of collective identities and conflicts (…) are present in both regions. Organisations usually do not have enough capacities to cover all complexities. There is never enough support, there is usually no support by the states, the work often relies on enthusiasm of individuals, who are thus in high risk of burn-out (…). The need for reflection and empowerment is crucial.”

And, indeed, people who engage for peacebuilding and human rights around the globe face a number of shared challenges: many of them are working in very complex social and political settings in which peacebuilding rarely proceeds in linear processes but in loops, with deviations and setbacks. As a result, they sometimes feel that they are moving two steps forward and then three steps back. Peacebuilders often see themselves confronted with a Sisyphean challenge and therefore need an extremely high level of self-motivation and resilience to resist frustration. In many places, activists have to cope with harsh opposition or even repression and are constantly weighing up the risks to their own and their families’ lives. Most of them are familiar with the feeling of being overloaded and worry that they are running out of time. So why should peace activists from India, Bangladesh, Serbia, North Macedonia and Croatia, who come from very different cultural, socio-political and geographical settings, travel around and come together with colleagues somewhere in the middle of Bosnia-Herzegovina? There are several answers to this question.

First of all, it seems that even in highly diverse contexts, people share similar experiences in terms of conflict dynamics and obstacles in their efforts to (re-)construct the social fabric and relationships that have been destroyed by war and atrocities. Furthermore, exchange offers the opportunity to shift perspectives. Talking and comparing the different situations opens minds, so activists can learn from each other. At the same time, they gain incentives for self-reflection. Explaining their own context to people from other regions is a challenge but lays the ground for questioning and improving their own peacebuilding approaches. And finally, listening to experiences from other parts of the world makes people aware that they are not alone with their problems and others might offer alternative methods of coping with setbacks and dilemmas.

Study Trip to Mostar and Workshop in Sarajevo

The meeting started with a three-day study visit to Herzegovina,an area in South Bosnia not far from the Adriatic coast.Most of the time was spent in Mostar, a multicultural city that went through a painful and violent confrontation during the war in 1992-1995 and its aftermath. Ethnopolitical conflicts that contributed to the dissolution of Yugoslavia and the complex dynamics and the consequences of war can be studied in microcosm here. Much of the city’s infrastructure and ancient buildings were destroyed during the war and have been reconstructed since then with international support. Visits to contested war memorials, monuments and sites of war operations and atrocities contrasted sharply with the picturesque flair of this medieval city. Filled with inspiring reflections and discussions, the visit was enriched by talks with local peace activists and citizens who engage for reconciliation in a situation that is marked by ongoing tensions and competition around interpretations of the past. Furthermore, the study visit was a unique opportunity for all participants to get to know each other. Later on, the group met for a five-day workshop in Sarajevo, the capital of Bosnia-Herzegovina. Like Mostar, Sarajevo had always been a place where people from different religious and cultural backgrounds had coexisted and mixed. Both cities are still suffering the effects of large-scale violence during the 1990s and both illustrate the manifold difficulties in struggling with the past. Building a culture of remembrance that pays respect to the victims from different sides and addresses the different layers of history is a constant challenge.

Spending ten days with other people who are dedicated to achieving progress in peacebuilding and reconciliation, who strive for social change and want to make the world a better place is a unique opportunity and a source of empowerment. A kind of retreat where participants can take a step back from their daily obligations and troubles, where activists can talk in a protected and safe space and take away plenty of incentives and inspiration, is invaluable. An apt description of such an experience is that it widens perspectives and horizons. The author of this blog is grateful for the wonderful opportunity of being part of it.